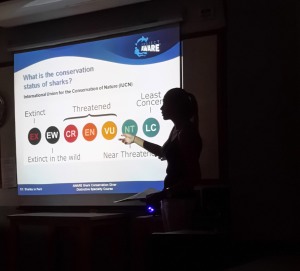 Sharks are extremely crucial to the marine ecosystem. Overfishing has driven many shark species to the brink of extinction. The Project AWARE Shark Conservation Diver Distinctive Specialty Course teaches students the significance of sharks in our marine ecosystem as well as the events that led to the global decline of shark populations. I love this course, especially because non-divers can engage in the program as well and receive an AWARE Shark Participation certificate.

Last month, I taught the Project AWARE’s Shark Conservation Specialty Course to students in Lanna International School in Chiang Mai. The goal of this course is to educate students and help them build a better understanding of sharks.

One of the major driving forces behind the global depletion of shark populations is shark fin soup. Among 102 students, about 10-12 students have tried Shark fin soup, shockingly, in restaurants around Chiang Mai. After the presentation however, many students were more considerate and I believe will choose not to eat shark fin soup again. What is shark fin soup? Many people are actually unaware of what shark fin soup is and have no idea where it comes from or of the practice of shark finning.

Shark fin soup is a traditional Chinese delicacy, a status symbol in Chinese culture, usually served at weddings and banquets. Serving shark fin soup to your guests demonstrates that you think very highly of them and that you have great personal wealth. Shark fin adds more texture rather than taste to the soup, in fact, it is the chicken broth that gives it the flavor. Sharks are often fished and get their fins cut off while they are still alive, and the rest of the body is thrown overboard to bleed to death, die from starvation because they cannot move, or even get eaten alive by other fishes. Just imagine getting your limbs cut off while you’re still alive and get tossed on the side of the street like a piece of trash. How is this any different?

This AWARE Shark Conservation Course turns students into informed and passionate shark defenders who will take any action to protect sharks. Are you interested in learning more about Shark Fin soup and other major threats that contribute to the global decline of shark population? Find out all about the crucial role that sharks play in keeping our oceans healthy and take the Project AWARE Shark Conservation course.

This site uses Akismet to reduce spam. Learn how your comment data is processed.